The optimal shell for valuable electronics has been the main focus of our work for 50 years. Nowadays we can be proud of more than 400 employees, who realize your wishes and requirements purposefully:
development, production and consultation – all from a single source.

Save the date – open house

Our open day will be hosted on the 17th of september, 2019. The doors of our location in Mehren, Germany will be open for you from 11:00am to 5:00pm. Discover 17.000 m² of production surface and have a look at our production techniques. Further information will follow.

A family business celebrates its anniversary

The apra-group, based in Mehren in the Vulkaneifel, is celebrating its 50th anniversary over the next few days. The founding of the company in Daun-Boverath in 1969 was possible due to the straightforwardness of the founders. The master toolmaker Wilfried Rademacher, who is originally from Westphalia, used to be the operations manager of a business in Bitburg. He built that company up from the bottom, beginning with zero employees. Suddenly, when the business reached 80 employees,  the founder explained to a surprised Wilfried Rademacher that a graduate engineer would be taking over his position to bolster the company’s image.

This was the decisive factor that led Wilfried Rademacher to forming his own company. Together with his former colleague Wolfgang Appenzeller, a graduate engineer with a specialization on precision mechanics and the prototype of a Swabian tinkerer, they founded the “apra gerätebau oHG” in Daun-Boverath in 1969. 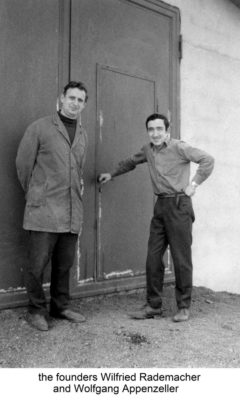 They were supported by Erika Rademacher, Wilfried Rademacher’s beloved wife. She had her excellent network already formed with important contacts in Daun and her responsibility was the commercial management of the shared company. The first location of the new business apra ( ap from Appenzeller, ra from Rademacher and norm as a hint that they were planning on producing norm-products) was a 120 square meters big old barrack, which they bought used from the American army. They had the goal of producing norm-products in the field of enclosure technologies that would easily go together.

Nowadays, there are additional subsidiaries that cover the entire range of different materials and production technologies. There are five locations overall, including Daun, Mehren, Neukirchen (near Chemnitz), as well as the sales companies in France and Poland. Due to limited extension possibilities in Boverath, the production facility was moved to Mehren in 2003.

At the moment the apra-group employs approximately 420 employees.

In the year 2018, the corporate group generated a revenue of approximately 52 Mio. EUR. 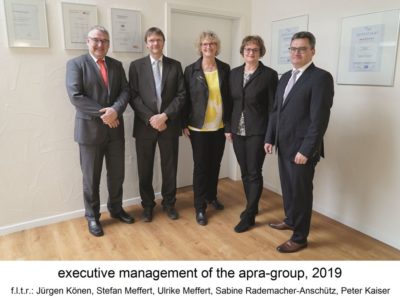 Since 2002, the second generation is continuing the success of the family-run business. Innovation has tradition at apra. There are continuous investments in new employees, new technologies and the modern machine park. A new center for technology and development, with an additional area of 4500 square meters, is currently under construction and will be ready to move into during this anniversary-year.

apra is a popular employer and a desirable training company. The training ratio lies at 12 % and is, therefore, higher than average.

The secret of success for apra is adaption to the constantly changing market requirements. Additionally to the shift of the market, they also analyze the structures within the company in order to remain competitive. Another development that has been going on for several years is the digital shift, which is supported by the executive management and by the employees. Automated information flows continue to take over production information step by step.

Business manager Stefan Meffert states: “Others talk about industry 4.0, we simply do it. We network everything that can be networked reasonably and that is how we gain advantages in competition.”

In addition to many other awards, apra was honored as a finalist for the Oskar-Patzelt-Foundation “Grand Prix for Medium-Sized Companies” in 2018. Business manager Sabine Rademacher-Anschütz: “As a company that is located and that has grown in a rural area, we feel a connection to our region and we gladly support athletic, social and cultural events in the surrounding area of our manufacturing sites.”

A special thanks goes out to the founders of apra, whose remarkable commitment in the past has laid the foundation for the company’s present success.